Yeah, so it’s a bit untimely, but I’ve been quite busy and haven’t found my way to posting this overdue blog entry…until now.

In 2008 I found a Dirty Dancing calendar in the dollar bin at Borders. When the year came to an end I saved some of the pictures from the calendar because I thought they might come in handy at a later time (for what, I don’t know). Anyhow, at one point I cut Patrick Swayze out of a picture and gave him to my co-worker who made him the guardian of her cubicle plants. There he remained until one day I noticed that another one of my co-workers had taken paper doll Patrick to his cubicle to guard over a collection of stress ball squeezie things. Paper doll Patrick became somewhat of a department joke and eventually ended up pinned up between two cubicles as a decoration. About a week after he’d been hanging around up there, he died in real life. I partially attribute this to the fact that he was shanked in the head by a cubicle tack–poor Patrick was a voodoo doll!

Since I’m a Patrick Swayze fan, I thought it only decent to give his paper doll likeness a proper sendoff to heaven. 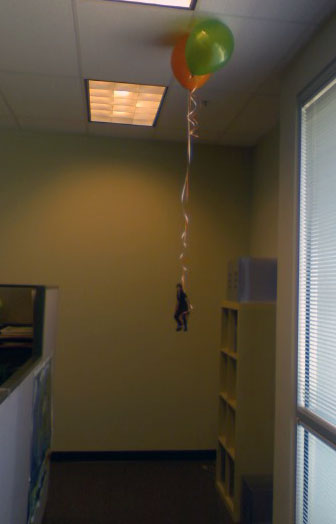 Patrick attached to his heaven-bound balloons

Check out the video I took of his final journey: